Event Production – THIS IS Live

12 Nov Event Production – THIS IS Live

Posted at 10:05h in Our Work by Nicholas Burman

THIS IS Live was the official launch party for the THIS IS Dance 2016 Album, and Record-Play’s experience in event production was utilised by the team at THIS IS to help them put on a successful night.

The inaugural event coincided with the release day of the double-album – an essential collection of the biggest dance tracks of the last 12 months – and took place at Brick Lane’s 93 Feet East. Sigma, the UK chart-topping drum & bass producers behind the No.1 singles ‘Nobody to Love’ and ‘Changing’ feat. Paloma Faith, headlined with support from David Zowie and Secaina Hudson.

Our role was to promote the show, and execute the evening including advising on and organising the venue, times and additional production needs. And we oversaw the running of the night itself.

The event was incredible. Alongside some great performances, THIS IS took over the home page of Spotify and streamed the evening via banners there. It was the first ever stream on the service and over 3 million people ended up logging in to check it out.

THIS IS is a collective of dance music fanatics curating the hottest dance tracks into the UK’s biggest playlists and compilation albums. With THIS IS Dance Floor and THIS IS House among the fastest growing and most followed playlists on Spotify, there wasn’t a better way to launch the ongoing THIS IS Live series in style. 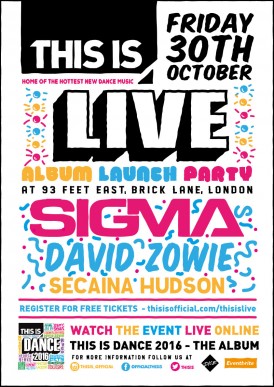