Posted at 10:17h in Insights by Editor Chief

The Covid-19 pandemic has affected every part of society, and the music business is no exception. This document highlights the key ways that the music industry has changed over the last three months, whether temporarily or perhaps more permanently.

We’ve divided it into seven different sectors: live music, recorded music, music marketing, sync licensing, tech, business and donation programmes. In each section we’ll take a look at the most interesting activations within each sector, and predict some possible futures.

As a result of concerts being cancelled worldwide, a whirlwind of video content has swept across multiple platforms since the beginning of social distancing. From Zoom to Instagram, Facebook, YouTube, Twitch and beyond, many musicians have opted to engage in the live-streaming trend.

→ Fortnite hosted a Travis Scott concert that attracted nearly 30 million live viewers.
→ Mixcloud developed Mixcloud Live, a music-focused streaming solution that enables DJs to livestream mixes via a legal and licensed platform (unlike many platforms, which have fallen foul of copyright infringements).
→ Facebook launched new tools to enhance digital live experiences, such as Venue and Collab, a mix-and-match app for making collaborative music videos.
→ Most (if not all) streaming platforms enabled new monetisation methods, usability features and access to analytics for users in order to attract artists to their services.
→ Laura Marling’s ticketed and geo-targeted live shows proved you can generate revenue from online live concerts. Her manager stated: “We believe PPV (Pay Per View) is here to stay and will be an important part of artists’ release campaigns going forward, working in tandem with their traditional touring and allowing them to reach fans all over the world.”
→ Spanish festival Cuarentena Fest emerged during the first weeks of social distancing, earning the attention of music media worldwide.
→ Noonchorus, Love Lockdown, United We Stream (which has raised over £382,000 since April), Club Quarantine, Live From Out There (who have raised $600k) and Boiler Room produced live free-to-watch events that provided optional ‘tipping’ of the artists.
→ Global artists who created original content during lockdown, such as Miley Cyrus, Erykah Badu and Charli XCX, saw their social media following increasing by an average of +500% 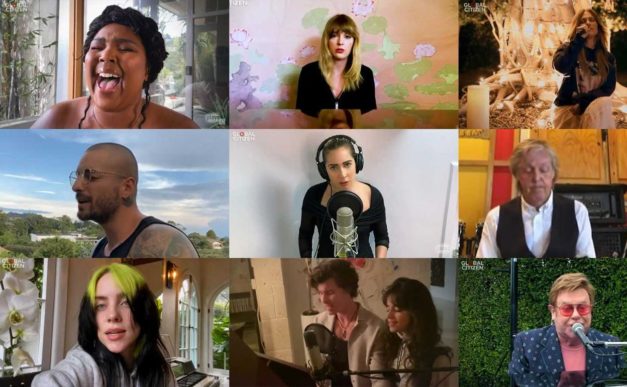 In terms of looking at the future of live music:

→ Many healthcare experts are not expecting live events to return until 2021, putting the future of many in the live music industry, from booking agents to tour managers, at risk.
→ It’s also a major blow to many artists, for whom live revenues can account for 75% of total income.
→ While some artists, venues and music professionals will be able to access charitable support or create crowdfunders, government support for live music varies massively across Europe.
→ Festicket surveyed over 110,000 festival-goers from across Europe to find out how comfortable they feel about returning to live events. The survey found that 82% of fans would feel confident attending a festival within one to six months of lockdown being lifted. Within that group, 66% would feel confident enough to attend within three months, while 30% would happily do so immediately after lockdown is lifted.
→ Glastonbury’s Shangri-La team launched Lost Horizon VR festival, while other venues and festivals are adapting to the new normal by placing tables and chairs at the dancefloor area in order to secure social distancing, moving to digital and more.

While music streaming has been relatively insulated from the effects of lockdown, there has been significant slowdown in most other areas. Physical sales have slumped due to store closures, while sync and performance royalties have also suffered due to the halt in TV and film production and the closure of most stores and restaurants.

There have also been some interesting changes to music consumption during lockdown:

→ Initial data showed a reduction of 7-9% in some streaming markets – though this appears to have recovered since. At the same time, on-demand music video streams have increased.
→ Classical and ambient music has gained a wider audience share during lockdown, while other genres have either narrowed slightly or remained relatively unaffected.
→ MIDiA predicts that “the combined effect of higher unemployment and reduced consumer spending could result in a worst case scenario of -4.0% annual growth for recorded music”.

Some initiatives worth mentioning:

→ One of the most prominent activations within the independent music community has been Bandcamp waiving their revenue share during monthly ‘Bandcamp Fridays’.
→ Spotify has integrated a tipping option for fans, made analytics more accessible for artists, and participated in relief funds.
→ Meanwhile Warner Music Group went ahead with their IPO, which has shown good results for the major label so far.
→ Record Store Day will now take place over three Saturdays – August 29, September 26 and October 24 – with LoveRecordStores also stepping in to fill the gap.
→ MIDiA predicted that the artist backlash against streaming royalties would be a natural, unintended consequence of the collapse in other music revenues, with more and more musicians questioning the fairness of current royalty rates.

The traditional PR route has been turned upside-down, with many music blogs and magazines losing staff temporarily or permanently. Will the ongoing struggle for music publications to survive make them less relevant to younger generations? TikTok, Instagram and even Twitch campaigns may shape the future of music PR, with TikTok’s weekly music chart attracting the attention of many music industry professionals.

→ Dua Lipa, Lady Gaga and Rita Ora have been responsible for some of the best music marketing campaigns during lockdown. Adapting to the circumstances and offering alternative ways for fans to enjoy new music and connect with artists has been crucial, whether by creating interactive experiences, releasing new material sooner than planned, or showcasing a more DIY-approach to content.
→ Music magazines such as Crack, the print edition of which was previously circulated around shops, bars and music venues, have been forced to go online-only (and are still having to crowdfund to stay afloat).

About the overall situation, Record-Play reached out to Tim Hampson, manager and co-founder of Candy Artists:

“Adjusting to a covid landscape has been a dramatic change, not just to the musical landscape but the mental approach to working and living in this industry.

The challenges we face are well documented with the live industry taking a particularly horrific battering, but the biggest change I’ve found as a manager are the conversations I am having with my artists. All are in various stages, some in full campaign mode, some having American tours pulled from under them as they stepped off the plane and others working to demo upcoming albums. In my opinion, a manager’s responsibility is to be alert and aware of the health and well being of our artists, I know some won’t agree and prefer a stand-off approach, but having that understanding allows me to be a better manager and have open, honest conversations.

This period of time has left a lot of people feeling extremely uncertain whatever the stage of their career is and those conversations have centered pretty intently on the future and what that holds. At times it’s a ‘how long is a piece of string?’ question, but thankfully there does seem to be a real support network opening up and a community of well wishing amongst the music industry. Usually we only see the fierce side, the competitive side. So it’s been nice to see everyone rooting for one another. Very little stays still in this industry, however for a moment there was a brief pause and the inevitable and now long lasting question of: ‘What do we do now?’

However I do think there will be a lot of new approaches and ventures which can only be exciting. It’s important to adjust and challenge the accepted norms. I hope a post Covid landscape sees some incredible ideas and initiatives break out, there are enough great minds in this industry to achieve that.”

→ According to Brooklyn Music Experience’s Josh Rabinowitz, “during this multi-month Covid era, nearly all of the music used in ads, marketing, interstitials, social and political messaging feels and even sounds the same: Solemn, bittersweet, uplifting, lots of minimal piano with repeated figures, or serious orchestral chords and colors”.
→ A lot of major labels/publishers and a few big indies have put together pre-cleared selections of music, in order to help out with maybe cheaper music for ads during this time.
→ The uptick in usage of Facebook Live and Instagram Live during lockdown has led to new guidelines in using music on those platforms.
→ Major multinationals are postponing ad campaigns and slashing marketing budgets, meaning that demand for music licenses has considerably decreased.

→ Fiona Apple has pledged two years of film and TV sync royalties from two songs on her latest album ‘Fetch The Bolt Cutters’.
→ EFF’s Cory Doctorow posited “a blanket licence for the internet”, run by a new collecting society based on user numbers. “You pay the collecting society a monthly license fee that goes up with the number of users you have. If you have one user and Facebook has 2.5 billion users, then your license fee is 1/2,500,000,000 of Facebook’s fee,” wrote Doctorow, adding that at least 50% of the collections should go directly to artists.

Plenty of new tech is being developed in order to drive the industry forward post-Covid. What does the future hold?

→ An increasing amount of music software and online platforms that allow remote collaboration are appearing, including BandLab, Audiomovers Listento, Endlesss, Soundtrap, Blend, Kompoz, Soundation, Ohm Studio and Audiu.
→ A new report by JCMR has been released, studying the impact and growth of music software companies from 2016 to 2026, taking into account the Covid-19 crisis. Top players according to the report are: Cloud Cover, Counterpoint Suite, Easy On Hold, Mood Media, NCH Software, On Hold Company, Overhead.fm, PlayNetwork and Rockbot.
→ Swedish music tech startup Corite announced the European launch of its fan-funding service and the closing of its seed round, which was funded through its existing music tech and early-stage investors.

Since Warner Music Group launched their IPO it seems like other majors are looking to do the same, with some tech and streaming services buying shares (including China’s Tencent Music Entertainment, Deezer and Spotify). In fact, Tencent now controls 10% of Universal, 9% of Spotify and nearly 2% of Warner Music Group.

The Covid-19 crisis may have kickstarted a range of initiatives intended to future-proof businesses, with many branching out into other sectors. A few examples:

Whether from charities, PROs, streaming services or direct from consumers, a range of donation initiatives have been launched to keep musicians and businesses afloat:

→ The Music Venue Trust charity teamed up with TCB Merchandise and live agent/promoter Neil O’Brien to launch a new initiative aiming to help support music venues across the UK affected by Covid-19.
→ In the UK, a £2.5million fund for musicians suffering financial hardship during the coronavirus pandemic was exhausted after just five days.
→ Artists and labels have been raising money via virtual events, Bandcamp compilations and limited edition merchandise.
→ Apple Music launched a $50million COVID-19 advance royalty fund to help indie labels.
→ YouTube launched a $100million fund for black creators and artists, following several donations announced by Warner, Sony and other industry majors.
→ Update: More relief funds are being announced from EU countries such as France, UK and Germany after the publication of this document.

Will this trend continue in the future? With social movements on the rise and many people and organisations willing to contribute to such causes, our hope is that Covid-relief funds and BLM donations are just the beginning of a more conscious industry outlook.