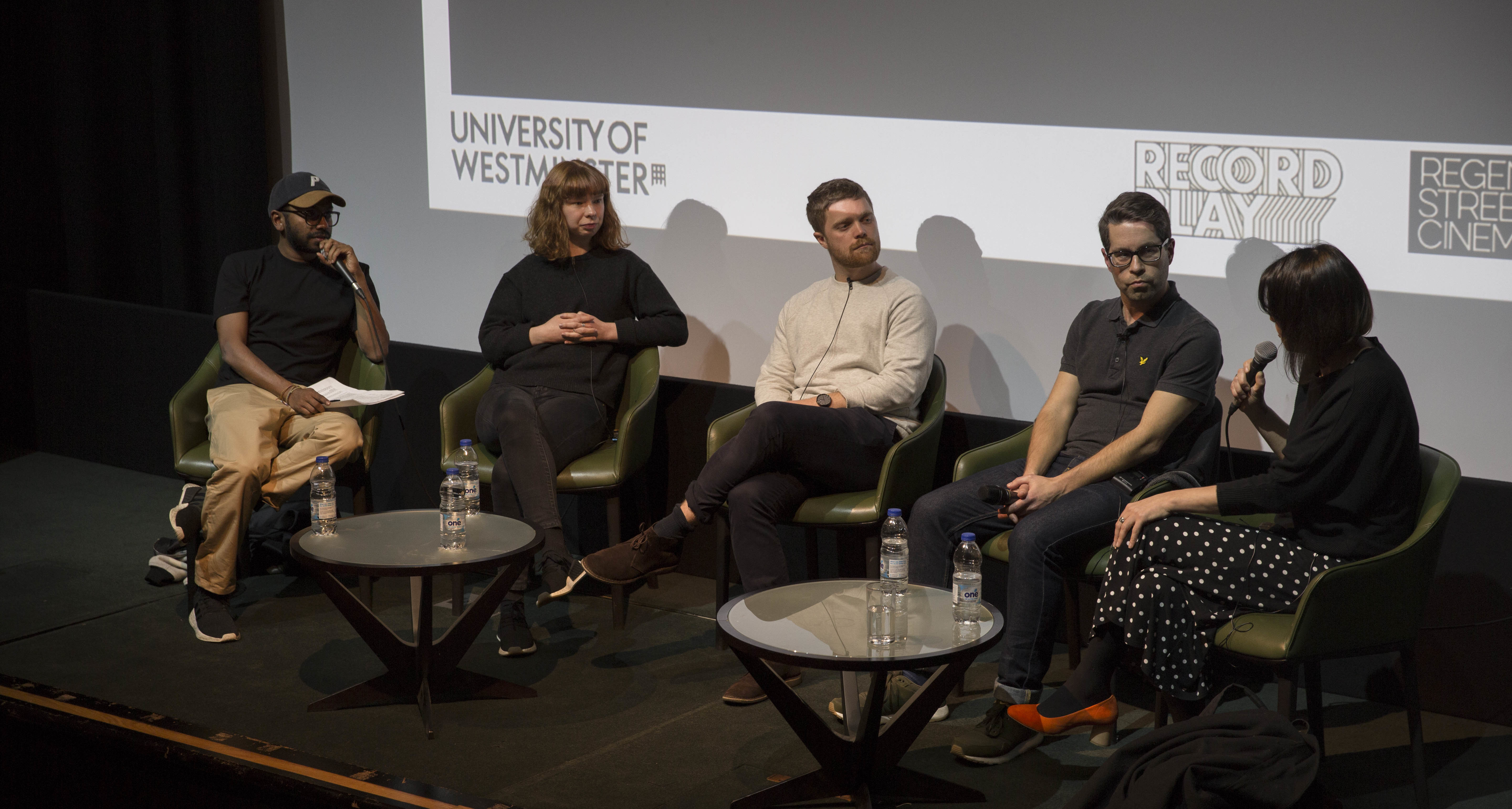 Posted at 12:05h in Insights by Joan Guasch

Whether it’s educating musicians on how to prepare their music for sync, informing rightsholders of ways to improve their chances of landing a sync, or explaining to brands and agencies how music can help take their campaigns to the next level, the more people understand about the world of sync, the less time we spend stressing about uncleared samples, missing metadata and puny music budgets. It’s why we wrote our book, Unlocking the Sync: A brand’s guide to bands and a band’s guide to brands.

One of our favourite ways to spread the sync gospel is by attending conferences and appearing on music industry panels, and as you’re about to see, 2018 has proved a busy year for us on that front. Before that though, we want to ask you a favour. We are currently pitching a workshop at next year’s SXSW extravaganza in Texas, which will explain ‘The Science Behind the Sync’ by exploring how the human brain responds to music and explaining where that can make a difference when it comes to consuming media. Run in collaboration with the science writer Zoe Cormier, ‘The Science Behind the Sync’ will, in our humble opinion, boldly go where no sync event has gone before.

Our chances of being able to prove this will be massively helped if people vote for it via SXSW’s ‘PanelPicker’ program. Simply head here to register and vote – it only takes a few seconds and we’d massively appreciate the support. Suffice to say that if we get through then beers in Austin are on us! To whet your appetite, here’s a talk Zoe recently gave at Google’s London HQ about her brilliant book Sex, Drugs & Rock ‘n’ Roll: The Science of Hedonism and the Hedonism of Science:

If you’re not heading to Texas next spring then you can catch us at a couple of other events in the more immediate future. On August 30th, Kier Wiater Carnihan will be appearing at Köln’s c/o pop Convention, sharing a few insights from Unlocking the Sync in an exclusive book presentation. Just two days later, Sync Licensing Manager Lauren Wilson will be moderating an artist-led at  Glasgow’s FM2U conference about the merits of DIY promotion vs. using traditional PR agents and radio pluggers, something she knows all about as a member of much-loved indie three-piece Our Girl. (The band just released their debut album, which was named Rough Trade’s album of the week – buy a copy here!)

Kier will also be moderating a panel featuring Record-Play CEO Daniel Cross at this year’s Future Music Forum in Barcelona, alongside former Coca-Cola marketing director Guido Rosales and Tim Miles, director of sync at Warner Music Group. ‘The Role of a Music Supervisor in a Global Campaign’ will explore the process of a major sync step by step, and explain how considered music supervision can add value to a campaign and open up fresh opportunities for musicians.

We will also be appearing alongside Aphex Twin (not literally) at Bilbao’s always-lively BIME festival and conference in October. If you’re interested in coming to any of these events then get in touch for more details!

As well as appearing at these fantastic events, Record-Play has also put on a couple of our own this year. In fact we began 2018 at London’s historic Regent Street Cinema, the first place in Britain to screen a film with accompanying music – and thus a fitting venue to launch our Unlocking the Sync book. 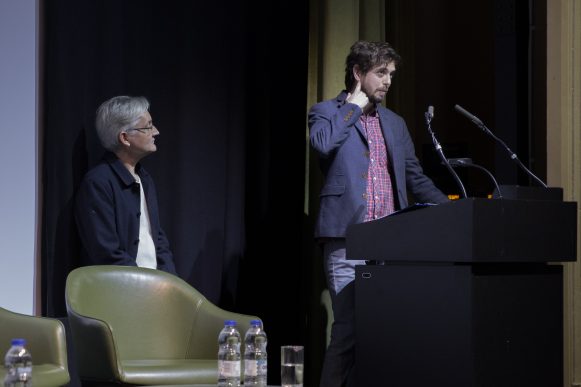 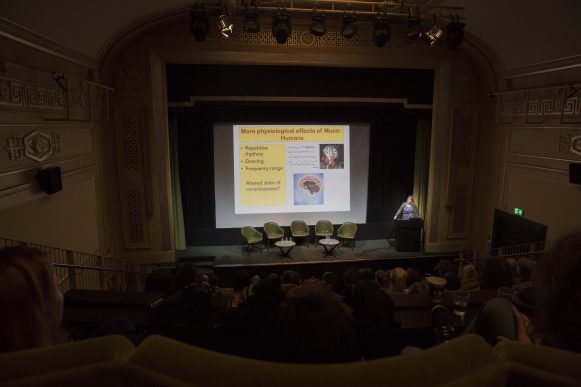 Organised in collaboration with our friends at Music Tank, the ‘When Sound Meets Image’ event opened with a fascinating keynote from Dr Catherine Loveday, who used her background in cognitive neuroscience to explain the musical characteristics that are known to provoke specific responses in the brain and body, and delve into the psychological impact of music in TV, film and computer gaming.

This was followed by an informative panel exploring the future of sync, starring our own Lauren Wilson alongside ThinkSync’s Connie Farr, Warp Records’ Will Theakston, and Duncan Smith of Sony Interactive Entertainment Europe. Moderated by Boiler Room and Livin’ Proof’s Raj Chaudhuri, the panel drew from their wealth of experience and shared a range of useful insights, as well as answering lots of our inquisitive audience’s questions. 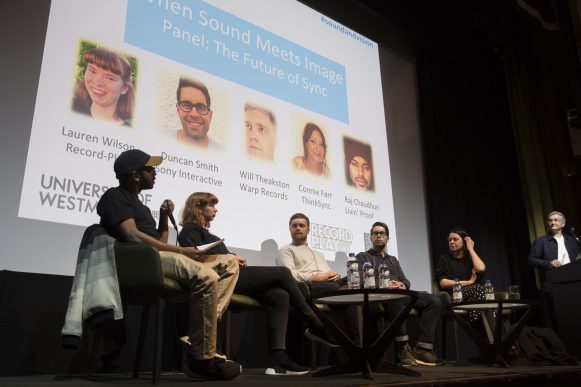 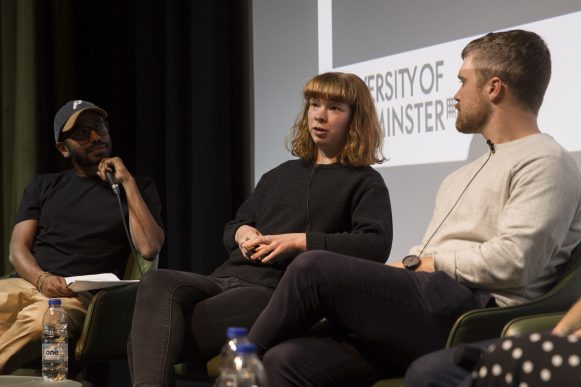 After a short break and a few refreshments courtesy of Portobello Gin, we returned with an entertaining ‘soundtrack challenge’, where an extract from Leilani Franco’s stunning short film Eelan was given three separate soundtrack treatments (including an original composition by University of Westminster students), to demonstrate how music can radically alter the atmosphere and impact of a production.

Last but by no means least, ‘How to Sync and Swim’ found independent artist and “one woman powerhouse” Laura Bettinson, aka FEMME, being interviewed by Unlocking the Sync co-author Eamonn Forde. Sharing several insights into how working with brands and television has helped support her career (as well as candidly revealing a few horror stories), it was a humorous and entertaining finale to a packed event. 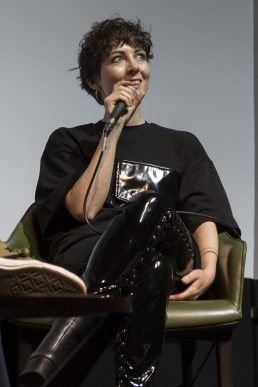 We followed up ‘When Sound Meets Image’ with another event in June, this time in partnership with the fantastic non-profit organisation Featured Artists’ Coalition. Lauren, Laura and Kier all spoke at the event, with Kier interviewed by artist and FAC board director Roxanne de Bastion before Lauren and Laura joined in for a panel discussion alongside Sentric Music’s Rosie Hill and FAC CEO Lucie Caswell. We were lucky to have a very enthusiastic and engaged audience (including Bullet the dog, below), and the discussion between panellists and attendees continued well beyond the closing Q&A, during a reception that was again generously lubricated by the good people at Portobello Gin. (You can read the FAC’s write-up of the event here.) 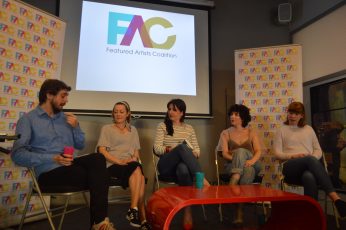 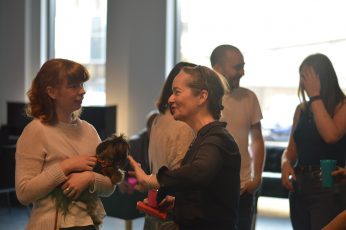 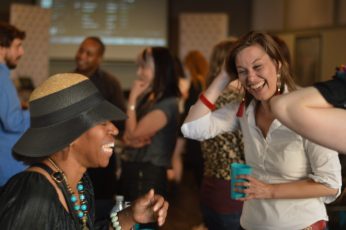 As busy as 2018 has proved, we’re hoping to meet even more of you at music industry panels and events next year. So again, if you have a second to vote for our SXSW 2019 panel then we’d be very grateful, and if you want to bring a bit of Record-Play magic to your event then give us a shout. Cheers!